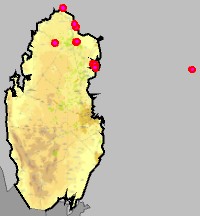 Mesembryanthemum nodiflorum is a species of succulent plant in the ice plant family known by the common name slenderleaf ice plant. It is native to southern Africa, but it is known in many other places as an introduced species and sometimes an invasive weed, including several regions of Australia, parts of the western United States and adjacent Mexico, and some Atlantic islands. This is a usually annual herb forming a mostly prostrate clump or mat of stems up to about 20 centimeters in maximum length. The small stem branches are lined with knob-like cylindrical fleshy leaves up to 2 centimeters long. The herbage is green to bright red and visibly bumpy with shiny, bubble-like papillae. Flowers are solitary or borne in loose clusters. Each is about half a centimeter wide with many narrow to thready white or pale yellow petals. The fruit is a capsule which opens when it becomes wet, releasing seeds.

How the web page was created

QNHG (Qatar Natural History Group) and associated people, for a possibility to participate in their field excursions and to learn about local nature.